Spring of this year brought about one of the largest revisions to the zoning text in recent memory.  With Zoning for Quality and Affordability (ZQA) touching on so many aspects of the ZRs with so many revisions it was frankly inevitable that a couple of “bugs” would wind up in the online version of the Zoning Resolutions (see here:  http://www1.nyc.gov/site/planning/zoning/access-text.page).  Unfortunate is that while the online ZRs are not the “official text” they are the best resource available of current zoning law for all of NYC, including DOB plan examiners, which gives them a kind of “de facto” supremacy.  Finding these “bugs” in the online ZRs is always fun because a simple error can throw what should be taken easily as fact into a tailspin.  As the bugs can be fixed with a simple re-upload of a PDF they can appear and disappear without warning, causing one sometimes to perhaps question their sanity in the maddening world of NYC zoning.

Take Community Facility (CFC) corner lot coverage for example.  Prior to the ZQA changes ZR 24-10 and 24-11 explicitly allowed a CFC building on a corner lot in an R10A district to cover 100% of the zoning lot, but part of the point of ZQA was to clarify contextual zoning bulk rules in line across a host of uses, not just Quality Housing Buildings (remember Quality Housing Bulk rules are mandatory for all buildings of all uses in contextual zoning districts).  ZQA says that fundamentally any building occupying a corner lot in a contextual district zoned R6 or denser may occupy 100% of its lot with specific exceptions [ZR 23-153].  But when the community facility language was uploaded linking 24-10 back to 23-153 one critical word was missing from paragraph (b) per screen grab taken in July of this year below (note the text and arrow in red was added by myself in Microsoft Paint): 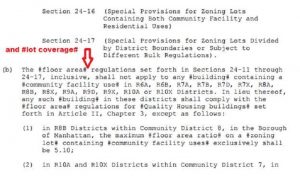 You can see the current version of the text here as approved by city council and currently available online: 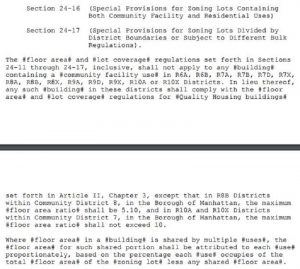 Note that paragraph (b) from the first screen grab and the entire paragraph from the second screen grab say largely the same thing, but with that critical clarification about lot coverage not being mentioned in the first screengrab.  As a matter of fact, it seems ZR 24-10 paragraph (b) was never even supposed to exist as the approved text never mentioned it and all the lot coverage rules were included in a single paragraph within ZR 24-10, yet somehow paragraph (b) made it into the online version of the ZRs for a brief moment in time.  Note that the PDF download of the entire zoning text actually had the correct language as of June of this year, so it seems just the purely online version suffered from this specific glitch.

I wish I was making this up, and the first screengrab of the non-existent ZR 24-10 paragraph (b) is a photoshopped Halloween trick, but I’m truly not.  It just goes to show that the most important part of the online version of the zoning text is still the disclaimer provided on the cover page of every article:  the Web version of the Zoning Resolution of the City of New York is provided for reference and the convenience of having the Resolution in an online format.  Not necessarily making it the official text.