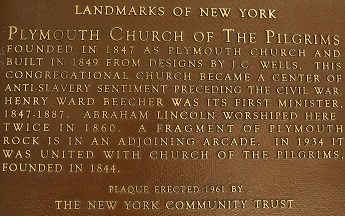 The Landmarks Preservation Commission (LPC) has launched an interactive map that tells New York City’s abolitionist history as embodied by designated landmarks, New York City and the Path to Freedom. The project, which coincides with the 400th anniversary of the first enslaved Africans in America, was designed to increase awareness of the important role New York City played in the fight to end slavery nationwide and in helping freedom seekers.

Organized by borough, the story map uses narrative text, images, maps and multimedia content to highlight designated buildings that represent how people and institutions supported the anti-slavery movement before the Civil War, through religious and political activism, as well as participation in the Underground Railroad. Also included are landmarks associated with early free black communities established before national emancipation.

In highlighting the city’s heroic aspects in abolitionist efforts, the map does not downplay the reality of slavery in the five boroughs, where the first slaves arrived in New Amsterdam in 1626. In 1740, slaves represented 20% of New York City’s population, with two of every five households owning at least one slave. Two centuries passed before total emancipation arrived in 1827.

Even before the Civil War, Brooklyn played a significant part in the abolitionist movement, despite heavy economic reliance on the storage and export of agricultural products from the South. The map features nine landmarks associated with the Underground Railroad, including residences that housed slaves, churches that provided aid, and a free African-American village.

More than 10,000 free African Americans lived in Manhattan before the Civil War, primarily south of 34th Street. Many historic locations related to abolitionist activism and African-American life have been demolished, but the map features two buildings with a documented abolitionist history. The map also includes the historical site of Seneca Village, a community of free African Americans located in what is now Central Park.

Long Island, including Queens County, had one of the largest slave populations in the North—until 1827, when New York abolished the practice. Even so, the borough had areas of abolitionist activity, especially in Flushing. The map features a Quaker house of worship, where abolitionists preached against slavery, and a farmhouse owned by a prominent family of anti-slavery activists.

During the colonial period, slaves represented 10 to 23% of the population in Staten Island, but many free African Americans moved to the borough in the early 19th century, drawn by the availability of cheap land. The map highlights four Staten Island landmarks, including a home documented as part of the Underground Railroad network, the residence of prominent abolitionists, and the free African-American community of Sandy Ground.