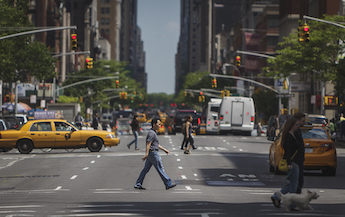 Please join the New York City Police Department (NYPD), Department of Transportation (DOT) and other city agencies in making our streets safer. Despite significant improvements in recent years, more than 250 people are killed and approximately 4,000 are seriously injured every year in automobile crashes. For children under 14, getting hit by a car is the number-one cause of injury-related death; for senior citizens, it’s the second leading cause.

According to the Vision Zero website, “on average, vehicles seriously injure or kill a New Yorker every two hours.”

On October 29, 2019, New York City launched the fourth annual Dusk and Darkness campaign, which highlights increased risks to pedestrians and cyclists during the fall and winter months. The campaign opened with a “Day of Awareness,” with NYPD and DOT street teams educating drivers and other New Yorkers at high-priority areas throughout the five boroughs.

NYPD will again increase their on-street presence during sunset hours, when more serious pedestrian crashes occur. Enforcement resources will also focus on the most hazardous violations, including speeding and failure to yield to pedestrians.

Through December 15, 2019, DOT will run radio ads during the evening commute to remind drivers of the dangers of decreased visibility and the need to yield to pedestrians and cyclists. DOT statistics from 2010-2014 show that serious collisions increase by approximately 40% in the darker early evenings, following the end of Daylight Saving Time.

The Vision Zero Action Plan seeks to reframe traffic crashes not as “accidents,” but as “preventable incidents that can be systematically addressed.” To that end, New York City is taking the following actions:

We applaud these efforts to keep our city streets safer for everyone, New Yorkers and visitors alike. At the same time, every one of us has a personal responsibility to do our part in this shared vision. Please join the effort to make the greatest city in the world also the safest.