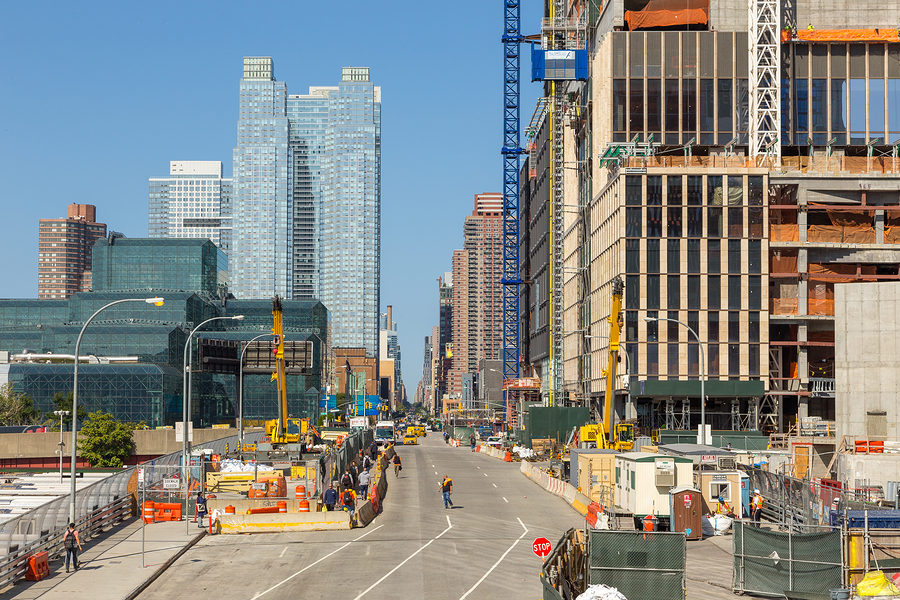 As we start a new decade, the New York City building boom continues in its sixth year. Here at Metropolis Group, we continue to see exceptional levels of construction activity, which supports the findings of the 2019-2021 New York City Construction Outlook. The report, published in October 2019 by the New York Building Congress and New York Building Foundation, describes the current boom as the most robust of this young century, bringing record levels of investment and employment for our industry.

The number of construction jobs is expected to increase to more than 161,000 in 2019, which would represent the eighth consecutive year for job growth. However, the Building Congress predicts two consecutive years of lower employment numbers ahead—157,200 jobs in 2020 and 153,600 jobs in 2021.

Even if these decreases come to pass, the forecasted average for 2019-2021 would still represent 4,900 more jobs when compared to the previous three-year average.

For 2019, the report forecasts $19.7 billion in residential construction spending, which includes both new construction and alterations to existing buildings. The figure represents a 13.8% increase over 2018. Like the employment numbers, however, the Building Congress expects residential spending to drop in 2020—to $17.6 billion—with a slight increase in 2021, to $18.1 billion.

Driven primarily by office space and educational institutions, non-residential construction spending is projected to reach $21.2 billion in 2019, compared to $20.4 in 2018. This number is expected to increase to $23.8 billion next year before returning to $21.2 billion in 2021. Investment in non-residential construction should create a record-setting 51.2 million gross square feet in 2019, with 34.1 million and 28.9 million gross square feet contributed in 2020 and 2021, respectively.

While the bulk of construction activity continues to take place in the private sector, government spending on infrastructure has grown every year since 2016, a trend that should continue through 2020. Public works construction—such as mass transit, roads, bridges, and other infrastructure—is projected to reach $20.6 in 2019, an increase of more than $2 billion over the prior year. This figure is expected to rise to $24.5 billion in 2020, before falling back to $22.8 billion the year after.

These numbers include heightened infrastructure investment by the City of New York, reversing the trend of recent years. If the city achieves the 2019 forecast of $9.3 billion in infrastructure spending, it will be the first time since 2007 that municipal spending exceeded the $9 billion mark.

Based on current and planned construction activity, our industry will continue to thrive as we embark on this new decade. But significant challenges remain—including the city’s shortage of affordable housing and the effects of climate change, with the attendant regulatory changes to ensure our long-term sustainability.

At a time when our nation is more divided than ever, we must work together as an industry and as New Yorkers. We look forward to continuing our relationship with you in the year ahead as we shape the city’s skyline—and its future.